West coast swing pulses on the upbeats, so our normal triple step is designed to give a full beat of music to the upbeat; the & of the triple comes between the downbeat and the upbeat.

The syncopated triple rhythm flips this pulse: the & count occurs before the downbeat in order to make the downbeat feel accented.

The Drill: Without a partner, put on a song and practice doing triple steps with the basic rhythm. Then, switch to syncopated triples. Since the & now comes before the downbeat, you need to start the & count as soon as you finish the previous upbeat. There’s no time for a coffee break.

A word of caution: It is very easy for syncopated triples to become your basic rhythm because so much contemporary WCS music has frequent accents on the downbeats. Push break and tuck-based moves are particularly vulnerable, since it is extraordinarily easy to use the &3 to hit an accent and then dance out on the 4, rather than letting the compression build through 3&. When you are practicing syncopated triples, be sure that you are doing them deliberately and that your basic still remains the standard triple rhythm. For the tempting moves like push breaks and tucks, I would strongly recommend that you finish a session by practicing those moves a couple of times with normal triples to make sure that you reinforce the standard rhythm.

Put on a song, and practice performing each of the elements of footwork syncopations one at a time. Remember to practice starting on both feet!

Once you are comfortable with the rhythms of the syncopations, you can begin to stylize them by changing directions or modifying the free foot. For instance, a step touch can become a step ronde. A touch step can become a smearing of the foot across the floor before stepping. Walks can add foot swivels, touches, points, and kicks can go in different directions, etc. Play with these styling options to find something that’s comfortable and looks good on you!

The vast majority of footwork syncopations are built from a handful of basic movements. By drilling those movements, you can easily combine the pieces into a more elaborate syncopation to match the music.

The Drill: Without a partner, practice the basic movements for syncopations.

Single Rhythms: For these movements, you will have a different foot free after every two beats.

Double Rhythms: These movements contain two weight transfers over two beats, so you will have the same foot free after completing each movement.

Triple Rhythms: These movements contain three weight transfers in two beats of music. You will have a different foot free after performing each movement.

Quad Rhythm: This movement hits every beat and & count, from the & before the downbeat to the upbeat. Because this movement contains four weight transfers, you will end with the same foot free after completing the movement.

Many dancers habitually syncopate their triples. Instead of dancing 3&4, they dance &3, 4. While there’s nothing wrong with a syncopation when done intentionally, doing it all the time is a bad habit that should be corrected.

Syncopating the triple is common on tuck-type movements because it creates the compression on the downbeat, which is very useful when you need to accent a musical hit. However, many dancers use that syncopation inadvertently in all of their movements—regardless of whether or not there is an accent or if the syncopation would show anything in that pattern.

The syncopated triple introduces some problems when done habitually. The biggest issue is that it encourages rushing. In order to step the & before the downbeat, the dancer had to cut short the step beforehand (e.g., count 2 before a 3&4 triple that was syncopated to &3, 4). Now the dancer has to done several short steps and has to fill the time for both the 3 and the 4 with one step per beat. Many dancers struggle with that change. Newer dancers will frequently end up off time—too early—for their anchor. More experienced dancers will delay their movement to start the anchor on time, but lose body flight during that time because they can’t control their movement that slowly.

Habitually syncopating the triple also affects your partner. It can change their timing if you are not good at maintaining your body flight unchanged when altering your footwork. Syncopating unintentionally can also take away styling options from your partner. As a result, it’s important to be deliberate when you want to syncopate—and to keep the standard rhythm as your default.

The Drill: Put on some music and dance basic patterns while concentrating on the timing of your first triple. Be certain that your first step of the triple happens on 3, not before. It can be helpful to have a friend watch without dancing and check your timing (or record yourself to check on video).

Be vigilant about your timing. Because the syncopated triple is an unintentional habit for many people, you may not realize that you are stepping before the beat. Having a partner or video as an objective reference is helpful, but ultimately you need to become aware of when you are moving your feet. Pay attention!

Because the syncopated triple is so common in tuck-style patterns, be sure to dance a lot of passing tuck turns, sugar tucks, etc. to non-syncopated timing.

You may find it easier to practice this exercise with music that does not feature many accents on the downbeats. Blues music or old school R&B are great choices; contemporary music is more likely to accidentally reinforce your bad habits because the music naturally includes hits on the downbeats. 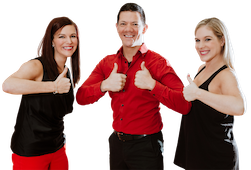