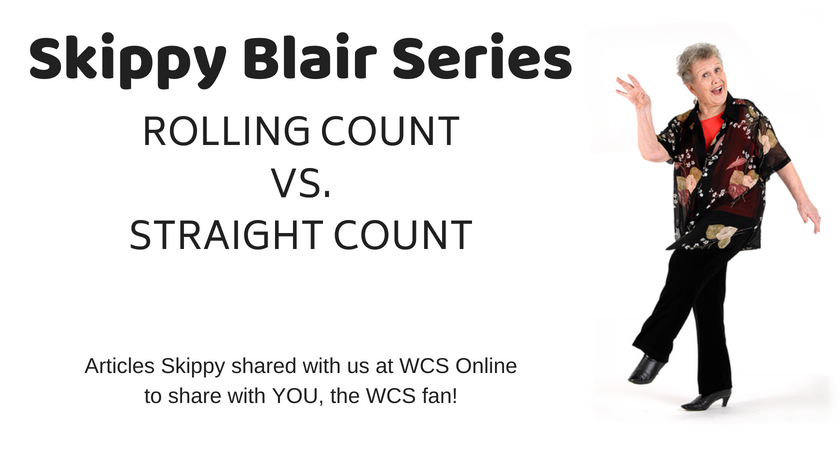 In March of 2018 I was able to spend a full day with WCS legend Skippy Blair. At the time of my visit Skippy had just turned 94 years old.

Skippy was instrumental in naming west coast swing in the 1950’s, with helping it become the state dance of CA in the 1980’s and was the co-founder of the WSDC.

First – learn to count to 8 and be able to identify the Downbeats and the Upbeats.  The Downbeats are 1-3-5-7.  The Upbeats are 2-4-6-8.  Each individual Dance Rhythm is composed of one Downbeat and one Upbeat.  Downbeats always come FIRST.

For many years, with the exception of West Coast Swing and Samba, most other dances were taught with a Straight Count– GSDTA.  Teachers and students had danced West Coast Swing with a rolling count since 1958 (Samba, even earlier than that).

During a GSDTA intensive in 1993, we discovered that using a rolling count raised the level of EVERY social dance.  To date, every dance tested has been performed at a higher level, simply by using rolling count – no exceptions.  Could there BE an exception?  Of course!  Sooner or later there is always an exception – if not today – tomorrow.  Well, tomorrow is here.

After a gradual insertion of Hip Hop music into West Coast Swing – one crucial discovery was the fact that Straight Count not only feels okay with this music, but hip hop music actually encourages straight count.  While that’s not always a bad thing, continual use of Hip Hop music can put a ceiling on your level of musical development.  A staccato “7 & 8” is frequently very strong (sometimes demanding) in the music.  Dancers accustomed to a Rolling Count still use that count because the music allows it.

Hip Hop music DOES NOT ENCOURAGE Rolling Count, and so, many new dancers do not get the chance to develop advanced, rolling movement, based on the fact that the music does not encourage advanced movement.  Upper level dancers are able to move their bodies with a rolling count and still dance straight Count with the feet, if necessary.  Newer dancers are not currently developing that skill.

In Classic West Coast Swing, Critical Timing and Rolling Count create the Magic that separates the amateur from the professional. It is this magic that thrills an audience and excites a performer.  Many TOP performers are unaware of what creates their own Magic.  Those who aspire to make Magic of their own are delighted to hear that it is a learnable skill.

Whether we use Straight Count or Rolling Count, the separation of Dance Rhythms into 2-Beat increments allows the dancer to feel a connection to the heartbeat of the music.  The study of 2-Beat rhythms allows for greater understanding of musical interpretation.  In partner dancing, the leader starts with body movement on the “&a” prior to the beat.  Even in solo dancing, movement of the body starts on the “&a”.  Movement of the Center Point of Balance (CPB) starts on the “&a” to gain more fluid movement prior to stepping on the beat of the music.

One step to 2 beats of music.  Single Rhythm steps ONLY on the Downbeat (Count 1) and does something else on the Upbeat, (Count 2 – brush, touch, hold, freeze, etc.) The call could be “&a-step &a touch”.

Important note:  Without the “&” – count the “a” count is impossible to place correctly.  There is no time slot for an “a” count unless you include (and say out loud) the “&” before the “a”.  Counting correctly leads to measured movement.  Measured movement leads to “body flight” and more professional, superior dancing.

In order to count seconds, we say “One-one thousand, two-one thousand etc.”  By saying “one-thousand” between each count, we set up a rhythm that occupies a “Time Slot”.  It is necessary to feel that rhythm in order to use the time slot to your advantage.  Practice counting without dancing.   Count: “&a1 &a2 – &a3 &a4”, emphasizing Count-2 and Count-4.  When that comes free and easy, try each of the following syncopations.

Here is an experiment:

There are really 2 levels of performance here.  The first example works, and is on TIME.  However, the second one is the Rolling Count- great for classic WCS and most other social dances, as well as Tap and Jazz.  Count “&a1 &a2”. CALL: &-step-step &a-step.

Note:  More and more Musicians – particularly those who teach – are discovering the use of Rolling Count when teaching budding performers how to feel the music.  “Lift the hands” for piano – “take a breath” before making the sound on a wind instrument or a vocal.  The discovery of Rolling Count is playing an important role today in the development of BOTH music and dance.

The Piano Player vs the Drummer

The Piano Player’s sheet music is far different from that of the drummer – and many times neither can read each other’s sheet music.  However, both of them can play the same piece of music at the same time and they are both in time with each other.  It works!  The dancers have their own sheet music that allows them to either match or counter the rhythms of the other players in the band, but still be critically in time with the other players.  It’s fascinating to watch a dancer who has mastered the art of being the lead instrument in the band – maintaining both a solid beat to the music and a good connection to a partner.

“Please don’t tell me how LONG to hold the beat.  Just tell me what the COUNT is – can I can place my feet” -Skippy